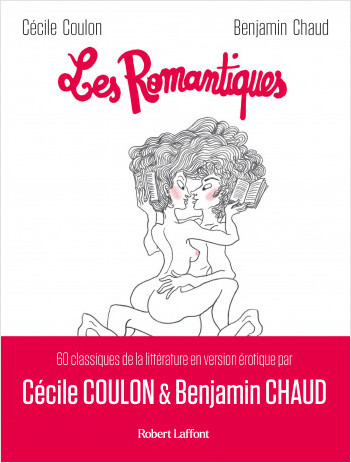 Release date : 28/10/2021
“When it involves love, sex, and literature, there are no low expectations.” Cécile Coulon
From Proust’s In Search of Lost Time to Molière’s The Doctor in Spite of Himself and Brontë’s Wuthering Heights, Benjamin Chaud and Cécile Coulon happily revisit the eroticism of literary classics with over sixty illustrations and poems full of spirit, tenderness, and humor. A beautiful, 128-page book whose texts and illustrations converse with derision, humor, tenderness, and poetry.
Voir la fiche produit
EAN : 9782221253496
Shaping : BROCHE
Pages : 128
Size : 165 x 220 mm

Cécile Coulon was born in 1990. In just a few years, she has quickly gained recognition and published seven novels—The Life Thief, Watch Out for Obedient Children, The King Isn’t Tired, The Laugh of the Wounded One, The Pelican’s Heart, Three Storm Seasons (winner of the Prix des Libraries), and A Beast in Paradise—and two collections of poetry—The Brambles (winner of the Prix Apollinaire and Prix SGDL “Poetry Revelation”) and Black Volcano.
Benjamin Chaud has had a successful career both in France and abroad, having illustrated over 70 books that have been translated in over 18 countries, including the Pomelo series, A Bear’s Song, Farewell Floppy, and A Funny Thing Happened on the Way to School. Appearing regularly on the New York Times bestseller list, he was awarded the Gold Medal by the New York Society of Illustrators.